Time for a Cuppa: The Twinings Tea Bar & Museum

In my adolescent years I was given to the wild excesses of Twinings Earl Grey, an imported box of which cost half my monthly allowance in Cape Town. So when I came across the original Twinings shop on Fleet Street recently while scouting the area for a local history adventure trail I was designing for kids visiting Dr Johnson's House, I found myself eagerly crossing the threshold…

Tea may be seen as quintessentially British - the ideal accompaniment to any social occasion and the first port of call in dealing with crisis - but until the late 17th century it was a beverage largely unknown in Europe. Nestled in Fleet Street, Twinings Tea Shop boasts a long and colourful history: a history visually announced by the languorous sculptures of two ‘Chinamen’ (rather cringeworthy by postcolonial standards) which flank the pediment above the door. Established in 1706, the Twinings tea shop is the oldest shop in London still owned by its founding family and located on the original site, not to mention holding the world’s oldest continually-used company logo. In the back of the shop is one of London’s tiniest museums, but well worth perusing over a nice cup of (free) Earl Grey.

… To try a new or unusual tea in the free, help-yourself ‘Tea Bar’ while looking at nineteenth-century prints of monkeys harvesting tealeaves in Ceylon or checking out antique tea caddies (you, not the monkeys, though I wouldn't put it past them). It’s also a fun place to take tourists (the box sets of tea make great gifts too), or to meet a friend to catch up over a cuppa.

Background
Straddling the border between Westminster and the City, the location of the Twinings shop on Fleet Street was a cunning move on the part of Thomas Twining, thronging as the area was with aristocrats who had been displaced by the Great Fire of 1666. And, given the prohibitive tax on tea, it was only the aristocratic who could initially afford to drink this exotic elixir, stored under lock and key in beautifully ornate caddies. With the knowledge and connections forged of working for an East India Company merchant in his early career, Thomas was well placed to corner the legitimate market, though tea smuggling was rife. In fact, tea leaves were cut and dyed with all manner of toxic substances to preserve and make it attractive for sale – the veritable heroin of its day.
Tea grew to great popularity in the eighteenth century alongside the rise of tea gardens, giving the coffeehouse and pub a run for their money, and gradually changing the eating patterns and social habits of the nation. Previously the evening meal was taken in the late afternoon, but with the rituals that grew up around afternoon tea, such as accompanying it with cakes, buttered toast and elegant company (hoorah!), dinner became a much later affair.  Originally providing liquid refreshments in the form of tea, coffee and drinking chocolate alongside dry tea for sale, it was the latter that made the family’s fortune. Under Queen Victoria, the family received an exclusive Royal Warrant to provide its wares to the royal household. Centuries on, and very little has changed: a special commemorative tea was released in 2011 for the royal wedding of Prince William to Kate Middleton (a delicate White Earl Grey with ‘light rose petal flavours’ and a ‘bright, sparkling amber colour’), and there’s no doubt a special release brewing for the Queen’s Jubilee. But Richard Twinings – Thomas’ grandson – was also instrumental in the passing of the Commutation Act, which dramatically lowered taxes on tea (from 119 to 12.5%), making it accessible to all classes and wiping out the tea smuggling underworld. 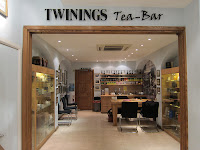 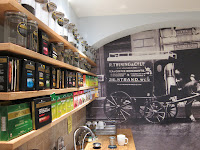 It’s worth noting that the tiny museum at the back of the shop does not purport to tell the history of tea (for that, you can catch glimpses at the London Docklands Museum, or hopefully a more comprehensive account once the defunct Bramah Museum of Tea and Coffee reopens). Rather, it’s the museum of a dynasty, intertwined with the evolution of a brand. Portraits of notable Twinings patriarchs line the walls of the shop like the corridors of a country estate, each perching somewhat proprietarily over a niche of products for sale: pastel-hued tealeaves of variously fruity persuasions or the coveted tea of the month display.
The portraits bear you along into the tea bar and museum at the back, the journey into the past completed by horse and carriage: printed across one wall is a C19th photograph of a delivery cart parked outside the store. Cases contain collections of notable tea caddies, family portraits, royal charters and early packaging, an eclectic mashup of objects and ephemera with little interpretation or evidence of curatorial intent. Perfect, however, for letting your eye alight on an unexpected treasure over a steaming mug of Lapsang Souchong.
Anecdotal Aside
Thomas Twinings’ son Daniel, who took over the family’s growing tea concern, was the first to export tea. He included amongst his patrons the governor of Boston. And we all know how THAT turned out.

Parting Shots: The Taste of Tradition
In 1831, Twinings launched the Earl Grey brand, named after then Prime Minister Charles Grey (who is now more famous for the eponymous tea than for the electoral Reform Act of 1832 or his role in the abolition of slavery). The distinctive taste came from infusing black tea with the oil of the bergamot orange from South-East Asia. The origin of the blend has become a source of myth and legend. My pick is the idea that it was a serendipitous accident caused when a gift cargo of tea from China to Earl Grey absorbed the flavour of the Bergamot oranges stored alongside it on the long journey. In 2011, after almost 200 years of Earl Grey tea as the ultimate cipher of ‘genteel contentment’ (according to the Telegraph), Twinings decided to oomph up the citrus overtones, only to be barraged and boycotted by outraged teadrinkers across the nation declaring it was so bad they’d ‘rather drink PG Tips’ <cue collective intake of breath at the sheer audacity>. Twinings has since capitulated by (re)introducing Earl Grey: The Classic Edition. Now that’s what you call a storm in a teacup!
Posted by Amy Halliday at 03:36

Amy Halliday
Passionate about culture, knowledge, people, and the places where all three intersect, I'm captivated by my adopted city: London! Join me in my journey to explore the wonders of the city's museums, galleries and heritage sights, from the unknown and obscure to the familiar and well-funded. Learn with me, intern with me, and see where it takes you (and me)!